The Vento-Sol team would like to thank Olivier Schlamaand and Look Charms for the article “Tarn: Recycled sailboats to clean up agricultural effluents”. The article was published on the 8th of June and provides an overview of our latest innovation, ECOBANG NAVY: the first boat that must be filled with water!

Nicola Vento, 43, has invented a process that evaporates water containing phytosanitary products used in agriculture and viticulture. And has just developed a prototype allowing pleasure boats to be scrapped to be used as a recovery and treatment tank.

Recycle boats to better recycle phytosanitary effluents of agricultural origin. This is a promising idea that kills two birds with one stone implemented by Nicola Vento’s company, Vento-Sol, created in 2010 in Castres (Tarn). “When a farmer cleans his crop protection product sprayers, he has to clean them.” We thought of storing these waters in end-of-life boats, destined for scrapping. Enough to save money and participate in the circular economy. At the rate of one kilo of pesticides per ton of water.

“When a farmer cleans his crop protection product sprayers, he must clean them”

This is the latest idea of ​​a concept developed by Nicola Vento, called Ecobang-Navy, more intended for large quantities of water polluted with pesticides. Each boat at the end of its life, made of polyester resin, will be equipped with this patented system, consisting in evaporating this water laden with chemicals thanks, among other things, to forced ventilation.

The Aper, in charge of the dismantling of the boats, seduced

So that at the end only dry residue remains. “We tested for eighteen months and validated this solution which has an economic interest (it is cheaper than a standard tank to equip) and environmental”, affirms Nicola Vento, specifying that his project seduced the Aper, Association for eco-responsible yachting, an organization which manages the dismantling of boats at the end of their life. “And will therefore help us find the boats adapted to the specific needs of customers”, says Nicolas Vento, adding that its process is also cited in the recent opinion of Ceser, the Economic, Social and Environmental Council.

End-of-life boats to be transformed

The sailboat prototype capable of carrying 4,000 liters of effluent gave the best results. “If we could fill two boats this year, that would be good. They will be transformed, overhauled and sealed, initially, by the company Batho, based near Nantes. Then, we can imagine, to be closer to customers, calling on a partner company on the Mediterranean coast.” Farmers and winegrowers have three ways to get rid of phytosanitary waste. Store the washing water in a tank and send everything in the liquid state to a service provider. The downside is that it’s expensive. Few people do. There is also a one-hundredth dilution of this charged water before refilling the sprayers. Finally, Nicola Vento’s solution.

These pesticides are so-called hazardous waste which was collected, for the first versions of this solution, by a specialized eco-organization, Adivalor, via the distributor of phytosanitary products. On the other hand, for the boat to be filled and the large tanks, the residue is supposed to remain there “for several years before a cleaning to be done by a service provider”.

The idea came to him to give sailboats a second life when he was looking for a trailer. “Many sold them with a boat to destroy. I realized that there is a huge deposit, according to Aper, with an objective of 5,000 boats per year to be deconstructed lying around everywhere in fields, at the bottom of sports…! Some are in relatively good condition. As soon as a sailboat is watertight, it can be used as a container.” 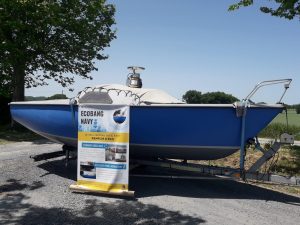 France is the first nation in the world to take an active interest in the recovery of water containing phytosanitary products from agriculture and viticulture. And to prevent them from being dumped raw in nature. The idea materialized, in the Tarn, in 2010 when only one solution proposed by the industrialist Bayer was floating. After years of uncertainty and legal tussles, Nicola Vento has won “all my lawsuits against the Ministry of the Environment, he said. As a result, the Environmental Code applies and therefore the Ecobang solution that we offer is marketable”. His ecological solution, VentoSol, he has already sold 342 times (for €123,000 in turnover in 2021) and hopes that, from now on, his sales will take off.

43-year-old Nicola Vento graduated in 2000 from business school. “My first job was in an innovative company that had invented “dryer bags”; my role was to find new applications for these bags. The main application was the evaporation of aqueous effluents for industry and then for phytosanitary effluents. That’s how I came to this idea. In 2007, I left this company.” From 2008 to 2010, he designed Écobang.